The Catamount 5 Near Space Balloon launch and recovery were successful.

First and foremost, a tremendous thank you to all that continue to support this project.

At 10:53AM, Saturday morning, Catamount 5 was launched from the Jackson County Airport next to the WCU campus. The balloon’s altitude exceeded 97,000 feet before bursting over Table Rock State Park and floating back to earth. The payload was recovered 6 hours later south of Tigerville, SC.

Below is the the actual flight path of the balloon and payloads. The last flight location data packet is noted by the balloon symbol and grey call sign, K4WCU-11. At the time of the last data packet, the altitudes was noted above 60,000 feet. Rapidly changing wind speed and direction may have played a part in in disorienting the tracking hardware. The APRS mini tracker failed following the last location data point. However the beacon signal and SPOT tracking device remained active and eventually guided the Tracking and Recovery teams to the recovery site.

The payloads were recovered at the location noted by the WD4A-9 call sign. 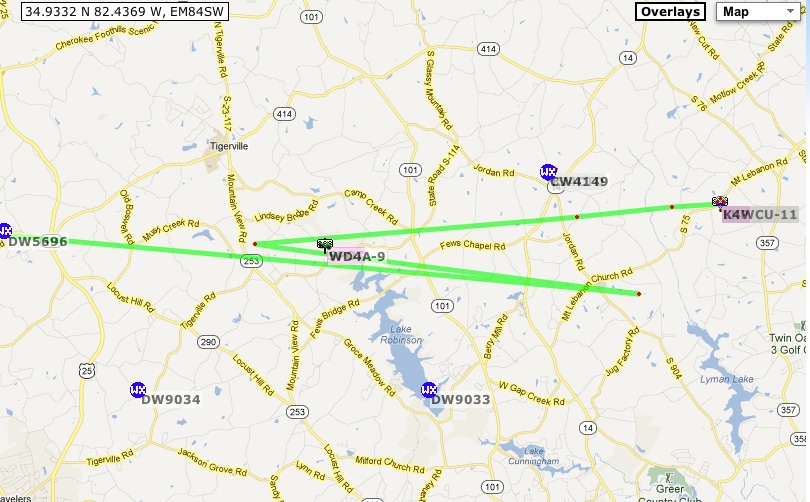 The Payloads were found hanging in a tree. The Owner’s permission was granted to cut down the tree to recover the payloads.

Thanks to all for your continued support. The Next launch is being targeted for sometime in July.

View Pictures from the payload here!

More Pictures of setup & Pre-Launch are on our Facebook group!

Credit to W3WZN, for this allowing us to use this writeup.